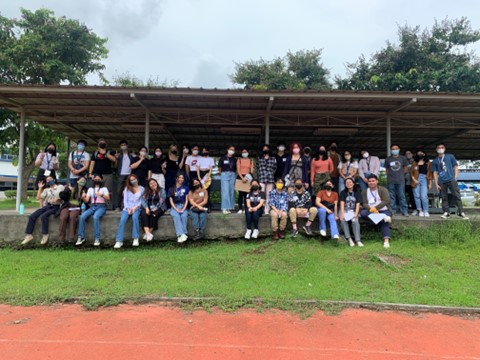 After almost three years of conducting online classes, Malayan Colleges Laguna, A Mapúa School’s college departments are welcoming students back through a week of conducting midyear general assemblies, gathering seniors, sophomores, and freshman alike who have yet to meet one another personally. With the goal to restore the bond, camaraderie, and most especially the fun and excitement in meeting different people in one’s college, the College of Arts and Science (CAS), the Mapúa-PTC College of Maritime Education and Training (Mapúa-PTC CMET), the College of Computer and Information Science (CCIS), and the Mapúa Institute for Technology in Laguna (MITL) held their respective General Assemblies last July 12, 13, and 14 and conducted programs to reconnect and reignite the spark among its current and incoming students.

Spearheaded by the CAS Student Council, Forda CAS: Kitakits Mga Ferson was held to welcome B.A. Multimedia Arts, B.A. Communication, and B.S. Psychology students as the current students are given recognition for their exemplary academic performance while engaging once again with their fellow CAS students – CASangga, as they would call them, in games and various exciting activities.

A campus tour was held in the morning to introduce the grounds of MCL to the sophomores and freshmen who are yet to experience them on a regular basis. The seniors, however, were reintroduced to the newly renovated facilities that were constructed when online classes began. The second part of the event held the main program which was held in the Einstein building.

“Remember that you are a star,” CAS Dean Lito Suello says in his speech as he greets the members of the CAS Department in person after almost 3 years, “You shine even in the dark times as you have displayed in your persistence to go on during your online classes.”

The third floor of the Einstein building was once again filled with students’ laughter and energy and in attendance were some of the professors and the program chairs of each program who were just as excited and jovial to witness their students once again sans the screen.

Elections for the new CAS Student Council Officers were also held during the event as the outgoing officers also made their thanks and bid farewell to their CAS Community.

Likewise, the Mapúa-PTC CMET held their General Assembly at the newly renovated MCL Gymnasium and welcomed their current and incoming cadets.

The Mapúa-PTC CMET students set sail for a day of fun and excitement as the CMET Student Council held an Educational Tour of their learning classrooms in M11, M120, M121, and M122 that housed their immersive learning tools that many of their seniors considered to be their second home during face-to-face classes.

In its goal of bringing back and forming stronger than ever bonds, a one-day basketball league was also held among the students that not only allowed for familiarity among the different batches but also reigniting their competitive spirits.

Distinguished professors in the CMET department were also in attendance to meet and welcome back their students and share their messages of hope and encouragement for the incoming academic year.

The College of Computer and Information Science (CCIS) held the first part of their midyear general assembly by recognizing the members of the Dean’s List at the Francisco Balagtas Auditorium last July 13.

The exemplary efforts that the students have displayed in their academic performance were given recognition as they are greeted and welcomed once again by the CCIS Dean, Prof. Khristian G. Kikuchi. Special awards were given to certain students as well who have excelled in various skills unique and highly coveted in the Information Technology industry. Distinguished professors from the CCIS Faculty were also in attendance during the awarding where they were able to introduce themselves personally to their students.

Part two of the Housewarming program was held at the Einstein building where the outgoing CCIS Student Council introduced themselves in person for the first and last time. They also conducted the election in search of the next officers for the incoming academic year after a program that engaged the CCIS first-year students, sophomores, and seniors in exciting activities that allowed them to mingle with each other.

The Mapúa Institute for Technology at Laguna’s (MITL) Cardinals General Assembly, which was held last July 14, was the last college department to hold its midyear general assembly that welcomed the different batches from the different programs under its department, hosted by the MITL Student Council.

A formal program was held to welcome the students in the morning that kicked off with an opening address from the then MITL College Dean, Engr. Orlando G. Perez. After the morning welcome, the campus tour followed shortly simultaneous with the student organization program that introduced the current MITL Student Council officers to their fellow MITL students. Beloved and distinguished professors also joined in on the event to both witness and welcome their students, with others being able to share their insights on what’s to come in the student’s academic life and what to expect for those who are poised to venture into the professional and working industry soon.

The highly anticipated 3v3 basketball game was held in the afternoon and Team Yummers emerged as the champion after a smashing performance against Team Newbie at the finals, scoring a clean 25-11, among the 16 teams that participated overall. In recognition, they were crowned during the awarding ceremony that also served as the closing for the MITL Midyear General Assembly.

Left on a hopeful and exciting outlook for the academic year to come, the Midyear General Assembly week was concluded with a promise of an even bigger, better, and stronger Wizards Community to come.

Kindly make sure that you’re done with the full Application Procedure before proceeding with the Enrollment Procedure on this page.

Take me back to the Application Procedure